How much RAM do you really need (PC/Laptop)? 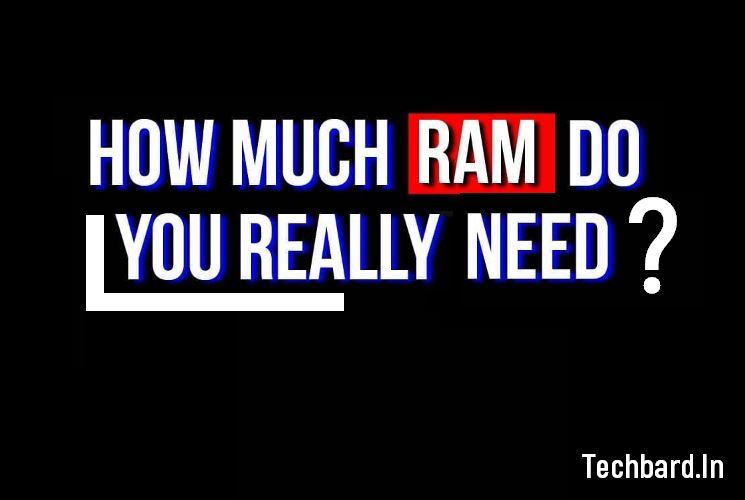 How much RAM do you really need (PC/Laptop)?

Do you want to know how much RAM do you really need for your Laptop/PC? here in this article, I'm showing the basic differences for different RAM capacities for your PC/Laptop. Choose your laptop/PC according to your usage.

Let's face it. Smartphones are doubling up on the memory game faster than personal computers ever did. Until two weeks back, I was using a smartphone that had the same amount of RAM as my desktop. Of course that changed when I made the decision of adding another stick, bumping it up to 16gb.RAM or random access memory is crucial for any computer system, its short-term memory for your pc which stores the most frequently used programs and instructions to speed up the overall system.

It is also the fastest medium of storage in your system when compared to say hard disk drives. RAM is also responsible for multitasking as it allows for multiple programs to load at the same time. On the pc, RAM acts as a buffer between your traditional storage and your CPU. Think of it as a temporary space for information that programs and CPU need in order to perform a task. Once you turn off a pc, all information stored within the RAM module is lost, module.

Which is why it takes a bit longer for programs to start up when you have just turned on the pc versus programs that have already offloaded data into the with the increase in bandwidth of internet, data and media consumption, the need of having a fast system is increasing by the day. One of the easiest ways to give a boost to your computer is by getting more RAM. Here is a simple guide on how you should choose your system memory, be it an upgrade or if you are building a new pc.

RAM, or random access memory, is a form of short-term storage in your computer. It's where the operating system keeps processes for programs you currently have open. When you shut down your machine, the contents of the memory clear out. Because RAM allows for fast access, you can switch between open programs quickly. It's much more efficient to swap between programs running in RAM than to pull them from your storage drive.

HOW MUCH RAM DO I HAVE?

Next, we'll see how much RAM is available in your system so you can compare it to some baselines.

HOW MUCH COMPUTER MEMORY DO I NEED?

Now that you know how much RAM your computer has, let's look at some common amounts of memory to see how much is right for your needs.

You're unlikely to find a modern computer that comes with just 2GB of RAM. You can work on one simple task at a time, such as basic web browsing, if you try multi-tasking then your system may be slow down or can get hang.

Most cheap smartphones available today even come with more than this. You should avoid buying a computer with 2GB of RAM.

2) 4GB OF RAM: SUFFICIENT FOR BASIC USE:

For a while, 4GB of RAM was considered the baseline for most computers. While the norm is moving towards 8GB now, you'll still find some budget laptops that come with 4GB of memory. But is 4GB of RAM good?

4GB of RAM is sufficient if you only use your computer for basic tasks like web browsing, light word processing or spreadsheet work, and email. It's not enough for a lot of modern video games and will struggle if you open many Chrome tabs or run dozens of programs at once.

Most mid-range machines you'll find today include 8GB of RAM. Notably, all of Apple's MacBook models include at least this much.

8GB is a good modern standard for RAM. It's enough to juggle several tasks at once without slowdown and is sufficient for gaming too.

You'll probably want more RAM if you often edit 4K video, stream high-end games to Twitch, or keep many resource-hungry programs open all the time. But if you're not a heavy computer user, 8GB of RAM should work fine.

16GB of RAM is a great amount if you use your computer for heavy tasks. Design software, video editing, and modern demanding games will all have more room to work with if you have 16GB of RAM.

However, it's overkill if you don't fit this description. Those who only open a few browser tabs and don't play video games or work with large media files can go with less RAM.

16GB RAM users are like: I can handle any task while playing a game also.

32GB of memory or more is only necessary for extremists. If you regularly edit 4K (or higher) video and want to work on other tasks while your computer renders the files, you'll need a huge amount of memory. For most others, it's a waste and you could put that money towards more useful PC upgrades.

Choose your laptop/PC according to your usage.