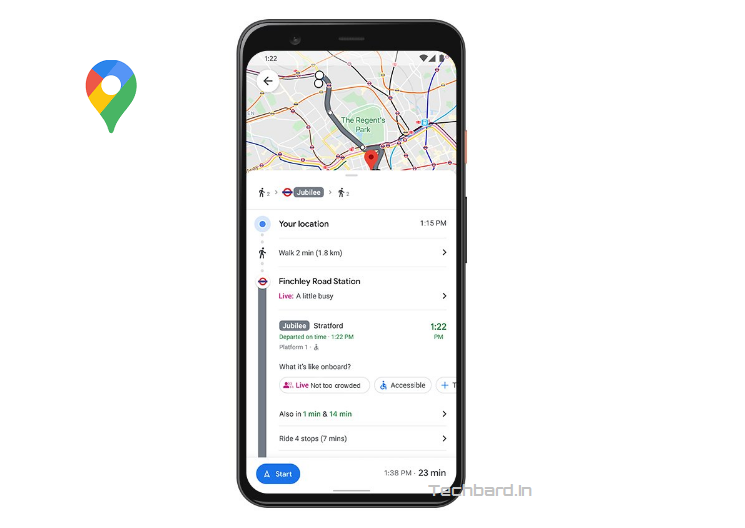 Google added a new feature to its Google Maps called 'Live Transit Crowdedness' a real-time data on public transport use. This feature is to help users adapt during the pandemic. The change will soon be available to users on Android, iOS, and desktop.
Google announced in a blog today that it is rolling out two new features that are dedicated to COVID-19 Changes.

The first one includes the updated COVID layer on Android and iOS will soon show more information, including all-time detected cases in an area, along with quick links to COVID resources from local authorities.
According to Google, this is especially handy if you’re heading out of town and need to get up to speed on the local guidelines, testing sites, and restrictions in another city and another one was to see how crowded your transit line is right now.

With this 'Live Transit Crowdedness' feature, Google Maps will now show all-time detected cases in an area, the last average seven-day trend, and the number of deaths there.
If you need to take transit, Google Maps can help you more easily social distance with live crowdedness information. On Android and iOS globally, you’ll start seeing how crowded your bus, train, or subway line is right now based on real-time feedback from Google Maps users around the world (wherever data is available).

“Since the start of the pandemic, we've added nearly 250 new features and improvements to Google Maps to help you adapt to this new standard: from live activity information for millions of places to easy viewing essential health and safety information at a glance, ” -says Glasgow.

Google is finally beginning to deploy Driving Mode, a Google Maps interface optimized for drivers. This feature was presented by the Mountain View firm in 2019. And today, Google is finally starting to deploy it for the users in the United States, on Android.
This feature essentially looks to reduces the need to look down at your phone while driving.
Alternatively, in the United States, Canada, Germany, Australia, Brazil, and India, Google has launched a feature of Maps which will be very useful for those who order food. In essence, Google Maps will be able to indicate when the delivery person is going to arrive or when to pick up a dish that has been ordered.
Moreover, these changes will soon be available to users on Android, iOS, and desktop.
Hello! Welcome to techbard.in Techbard.in is an "Indian Top Tech News Website"- This Blog completely dedicated to the Latest Tech News, Tech Updates, How-To's from all Top Sources in an…