Realme sold more than 6.3 Million Smartphone Units during the festive on Flipkart 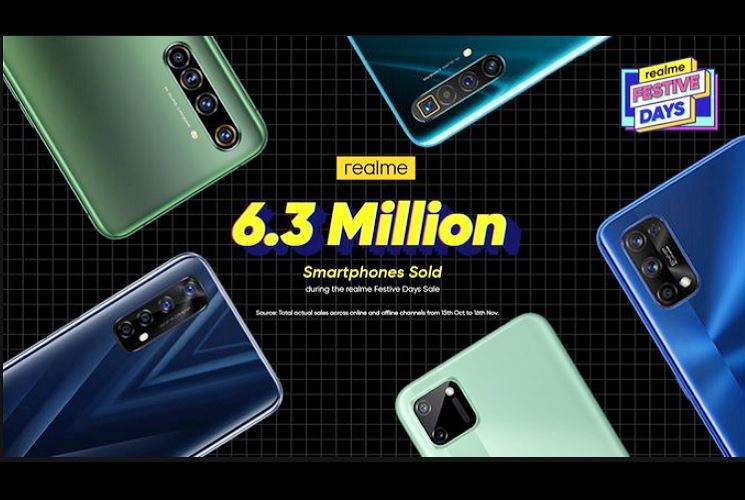 Realme sells more than 6.3 million phones on day one of the festive sales on Flipkart

The Chinese smartphone manufacturer Realme claims to have sold a total of 6.3 million new smart devices on day one of the festive sales on Flipkart, which increases 20% of sales during the festive season this year.

Realme has revealed today the official sales figures during these 6 days, revealing a 20% increase in sales when compared to last year's sales.

In total, they sold more than 8.3+ Million products and of which are;

As World’s Fastest Growing and India’s No.1 Quality Smartphone brand. We sold more than 6.3 Million Smartphone Units during the #realmeFestiveDays increasing by 20%+ YoY basis.
Thank you for the love and support, we will continue to provide best tech-trendsetting products. pic.twitter.com/dcGmxpxfWo

The sold are made during the Realme festive season which achieved the mark of the top-selling smartphone brand in India with more than 1 million smartphones per day (on average).

According to the Madhav Sheth, Realme Vice-President, and CEO, Realme India, Europe;

"We are overwhelmed to see the adoption of Realme products at such a fast pace. Realme offers the most blockbuster products which are high on features, style, and performance and is available across price segments,"

Moreover, Realme became the fastest brand in the world reaching five crore sales of which three crores came from India. According to Counterpoint Q3, 2020 Global Smartphone Shipment report, Realme retains the world’s fastest-growing smartphone brand tag for five consecutive quarters, Realme Narzo smartphones remains the top-selling smartphones in the Indian market as a part of a dare to leap initiative from the company.