Google's Nearby Share feature in Android is a convenient way to share links, photos, and more with friends and family even without a wifi connection 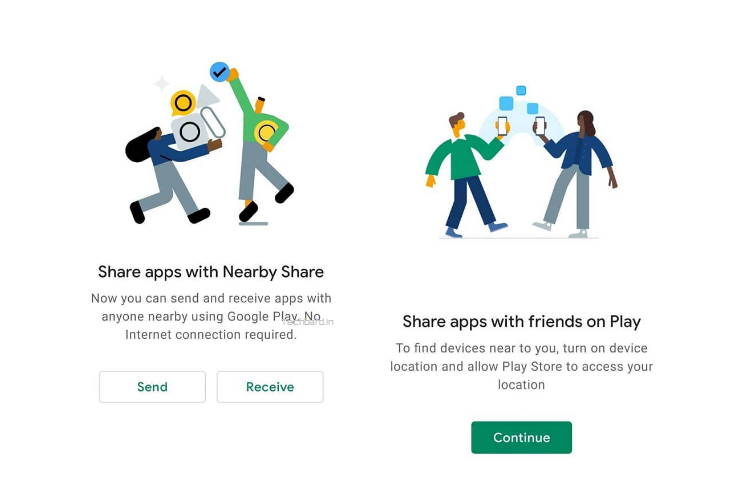 Sharing apps from your phone without installing third-party apps is now possible, with Google's new Nearby Share feature.

Tech Giant, Google adds a new page to the Play Store to share apps (Send or Receive) across android devices. Now one can Send & Receive apps with Google Play by using Nearby Share without Internet Connection. Whether you aren't near a Wi-Fi connection or are nearing your mobile data cap, using Nearby Share to send apps is a great option. Of course, whomever you're sharing to must be close by.
First of all, let us know what is nearby share? Nearby Share allows one to share different types of files including photos as well as links to devices near you. With the new addition of app sharing, one will now be able to send apps to devices near them.
Google's Nearby Share feature in Android is a convenient way to share links, photos, and more with friends and family. Nearby even without a cellular or Wi-Fi connection. The Nearby Share feature will let you share apps from Google Play with other Android users.
App sharing via the play store will work with all devices that currently support the "Nearby Share" feature.

Here's how to share apps using "Nearby Share";
If one hasn't received the feature yet don't worry the feature is rolling out in phases & will soon be reaching out to everyone in a phased manner.
By using the Google Nearby Share feature, which was able to test the new feature in Nearby Share, sending apps to friends is "shockingly fast," and maybe quicker than sharing over your home Internet connection. Once you do share an app with someone, they can install it without leaving the share menu. You can then disconnect devices.
Hello! Welcome to techbard.in Techbard.in is an "Indian Top Tech News Website"- This Blog completely dedicated to the Latest Tech News, Tech Updates, How-To's from all Top Sources in an…