Huawei Mate X2 launch date is set for February 22, the Chinese company revealed on Weibo on Wednesday. this foldable smartphone is successor to Mate X 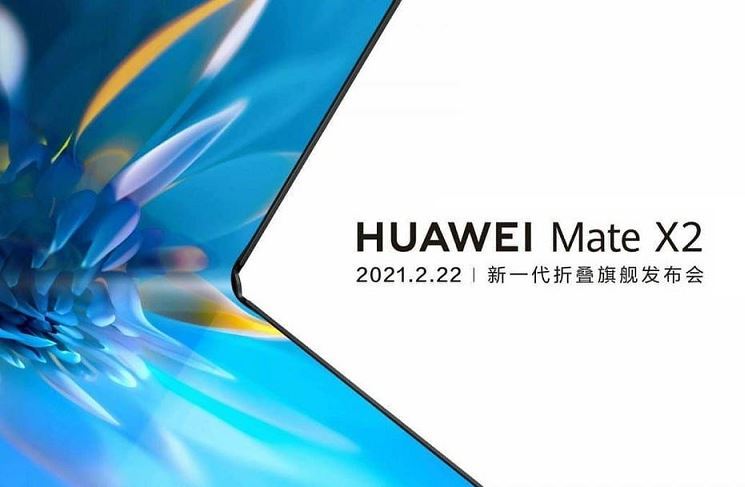 Huawei has officially unveiled the date of the launch of its new next-gen foldable Smartphone, the Huawei Mate X2. This new next-gen foldable smartphone will be presented on February 22 in China. Huawei, on its official Weibo handle, recently shared a teaser-image with the name of the foldable device and its launch date on it. As per this image, the Shenzhen-based giant will be launching its next-gen foldable device, the Huawei Mate X2 on 22nd February 2021. The announcement has made immediately after a report on the design of the foldable and its immediate launch. In the corresponding press, picture, the display of the Mate X2 is teased. As expected, the folding direction of the display has changed, Mate X2 will fold inward this time, unlike the company's previous foldable devices such as the Mate X and the Mate Xs that fold outwards.

With major companies like Samsung and Xiaomi looking to launch multiple foldable devices this year, it seems Huawei is preparing to launch its foldable in the market sooner.

Huawei looks like it's about to release the second generation of their foldable Huawei Mate X2 in late February 2021. A leakster from Weibo stated that Mate X2 himself will come with a new design, a 5 nm chipset (Kirin 9000), and also an" impressive " technology. Even for his own screen affairs, it looks like it will change from out folding to infolding like Galaxy Z Fold.

Huawei introduced its new phone poster, which shows in this poster that the phone's folder screen opens and closes in reverse and will take away the outer space instead of being inside the phone.

The new foldable is scheduled to launch in China on February 22 and we expect it to come with the Kirin 9000 processor. There is no info on a global release yet but if that will happen, quantities may be limited.
Hello! Welcome to techbard.in Techbard.in is an "Indian Top Tech News Website"- This Blog completely dedicated to the Latest Tech News, Tech Updates, How-To's from all Top Sources in an…