Spotify launches its first in-car smart player 'Car Thing' in the US, which hangs in your Car and allows listening to music

Spotify launches a streaming device (in-car entertainment system) called 'Car Thing' in US, which hangs in your car & allows listening to music 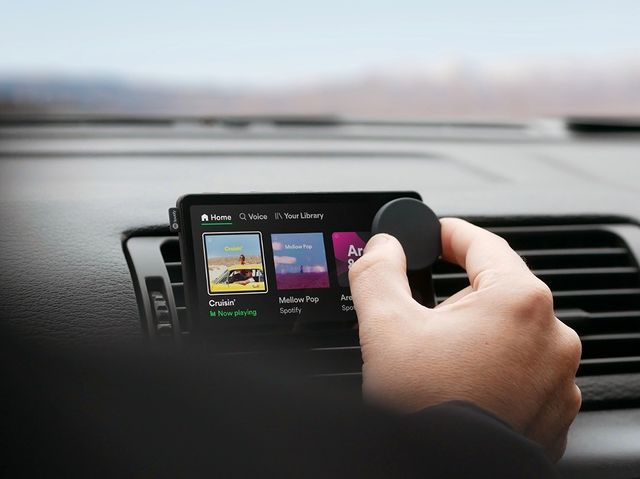 Music streaming service, Spotify is launching a new gadget (first electronic product) that fits inside a car called "Car Thing". This device is special for listening to Podcasts and Playlists while driving. Car Thing can be hooked to the grid of the car's air conditioning and allows music to be heard in 'Hand-Free mode that has a 12 volt stop contact. To use this device, customers only need to connect the phone to Car Thing and car audio.
Spotify claims that 'Car Thing' is its first music streaming electronic product, designed to displace mobile phone use for music, news, and podcasts.
Spotify's 'Car Thing' is currently available to US consumers only as a limited product launch by invitation. It's being offered at no cost except for shipping, and it is expected to sell for $79.99 (Appr. Rs.6010.20 INR in India) when it's more widely available.

Today, we’re excited to announce our newest exploration: the limited release of Car Thing, a new smart player that fills your car with music, news, entertainment, talk and more. Get the details 🚗 https://t.co/TfMBRUMRcm

What is Spotify "Car Thing"?

The 'Car Thing' is a Spotify controller that can be installed on a vehicle. It has a 4-inch touch screen, a dial for menu navigation, and four microphones that enable voice commands.

Probably most people thought, 'Why do you need this?' as soon as they heard the announcement. For those of us who are accustomed to cars with dashboards that support Apple's car plays or Android Auto, it's hard to understand why the 'car thing' is needed. Is there any reason to attach a device that can be used with Spotify Only' to a vehicle?

Spotify has been strengthening its larger 'ubiquity' strategy before. The 'car thing' is also part of this strategy, and we want to create a system that makes it easy for people to connect with Spotify everywhere, not just in cars. There is one definite target audience that can benefit from the 'car thing'. These are the people who do not have a Bluetooth connection between their cell phone and car.

Recently, Spotify has entered the podcast market and is making aggressive investments. In conjunction with this strategy, Spotify's'car thing' becomes a device that allows people who only listen to local radio in their cars to listen to their podcasts. You may need a 'car thing' to get people who turned on the local radio right after getting in the car to listen instead of the 'drive playlist'.

Voice data collection. Spotify, which prepares a service that matches the music you want to hear through your voice, Spotify's 'car thing' is equipped with a microphone, so you can communicate commands through your voice. And Spotify also wants users to give voice commands. The reason is that they are collecting voice data. Spotify holds a patent for a technology that uses voice data actually collected to determine mood, gender, age, intonation, and even how many people you are with. Spotify is actively developing a service to recommend optimal music through this voice data.
Spotify.

According to Spotify, its first in-car smart player 'Car Thing' works simply in 4 steps as given below;

Spotify's 'Car Thing' is currently available to US consumers only as a limited product launch by invitation. It's being offered at no cost except for shipping, and it is supposed to cost $79.99 (Appr. Rs.6010.20 INR in India) when it's more widely available.

Wat to try Spotify "Car Thing"? Join the waitlist from here
for more information read here
Hello! Welcome to techbard.in Techbard.in is an "Indian Top Tech News Website"- This Blog completely dedicated to the Latest Tech News, Tech Updates, How-To's from all Top Sources in an…