Clubhouse Android App- Clubhouse finally launches Android app on Play Store, It's only available to US users but it still requires pre reg to download 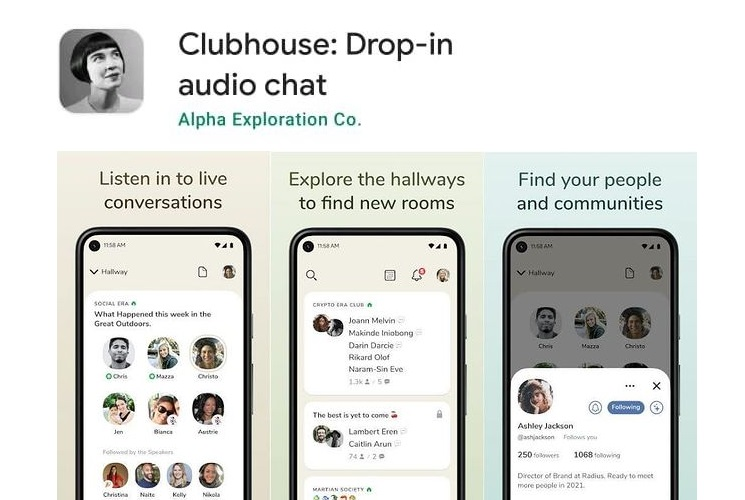 The most awaited one is finally released, for those of you who have been waiting for the Clubhouse App for Android finally available on devices with Android operating systems at the Google Play Store.

The clubhouse has released an app on Android. Before that, it's the year of iOS exclusive - It's only available to US users, but it still requires pre-registration to download it. You can do it through this link. The Clubhouse promised that the application will be launched worldwide over the next few weeks and made it public. - A gradual launch is necessary for testing the application and launching all features. Clubhouse voice chat launched in April 2020. Before that, the service was officially working exclusively through the iOS app. Lately, the number of downloads at Clubhouse has significantly decreased: in April - less than a million. By comparison, the downloads reached a million per day in February. Now the Clubhouse estimates are $ 4 billion. The fundraiser will spend on development and marketing: for example, it will pay fees to the authors of popular rooms in Clubhouse. Now there are hardly any voice chat versions on every social network.

Clubhouse Android App in India- Good news for Android device users who may have been willing to try the clubhouse for a long time. This one app is finally on PlayStore! But, the new Android version Clubhouse can pre-register. Not only that, there is another news about the availability of this app in India, the new Android version of Clubhouse is present in America and just followed by other countries later.

Also read:- What is the Clubhouse app? How to get noticed on Clubhouse?

According to the company,
Clubhouse-  "Today, we are thrilled to share that Clubhouse for Android will start rolling out in beta immediately. We will begin gradually, with the U.S. today, followed by other English-speaking countries and then the rest of the world. Our plan over the next few weeks is to collect feedback from the community, fix any issues we see and work to add a few final features like payments and club creation before rolling it out more broadly. If you are an Android user, you can download Clubhouse for Android and sign up now to be alerted once it's available in your area.
As a part of the effort to keep the growth measured, we will be continuing the waitlist and invite system, ensuring that each new community member can bring along a few close friends. As we head into the summer and continue to scale out the backend, we plan to begin opening up even further, welcoming millions of more people in from the iOS waitlist, expanding language support, and adding more access ility features, so that people worldwide can experience Clubhouse in a way that feels native to them.
With Android, we believe that Clubhouse will feel more complete. We are so grateful to all of the Android users out there for their patience. Whether you are a creator, a club organizer, or someone who just wants to explore, we are so excited to welcome you to the community :) - Paul, Rohan, and the Clubhouse team".

How to install Clubhouse Android App?

Here's How-To Install the Android version of the Clubhouse App on your Android Smartphone,

These are the android smartphones that work with Clubhouse;
Clubhouse Android- Finally, after a year of launching on iOS, Clubhouse made it to Android.
Share your thoughts via the comment section below.
Hello! Welcome to techbard.in Techbard.in is an "Indian Top Tech News Website"- This Blog completely dedicated to the Latest Tech News, Tech Updates, How-To's from all Top Sources in an…