Twitter launches a new 'Spaces' feature, available to users with more than 600+ followers 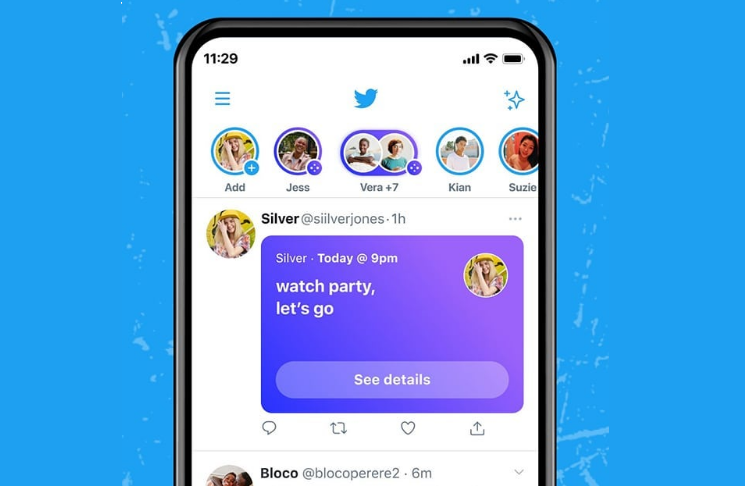 Twitter launched the new Spaces feature on Monday. This lets users join virtual spaces where they can have real-time audio conversations with others. Driven by the Hype of Clubhouse, Twitter started testing Spaces back in November 2020 Spaces will play a key role in the company's goal to increase the daily active user base to 315 million by the end of 2023 Twitter also announced that it is working on another feature titled Ticket Spaces. This lets users create areas for which others have to buy a ticket to become a member. Here's how Twitter and users of the app can also benefit from the money. This should allow users to monetize spaces and encourage them to have more live audio conversations on Twitter. The clubhouse itself has fewer downloads.

Twitter Competitors Clubhouse! Twitter has joined the live voice chat platform race by releasing Spaces that will compete with the Clubhouse.

Twitter's Spaces feature is a speech-only audio feature that allows a host to broadcast voice chats with other Twitter users. However, this feature, which is no longer in the beta version, will allow brands and users to create live chat rooms and host guests. Contrary to Apple's iOS operating system users, Spaces can be accessed through both iOS and Android. Twitter users starting to speak in Space will see a purple bubble appearing on their timelines. Other users can react with emojis or tweets while listening or message Space directly and request a speech. The chat owner can tweet Space and open subtitles so people can follow. The creator of the conversation controls Space, invites participants, but protects the power to mute speakers, take microphones, remove users or block them from Space.

Twitter Spaces, which is their implementation of an audio chat room feature, has now begun rolling out widely after completing its test phase. Twitter accounts that have 600+  followers can now create their own "Space" and talk about a particular topic or simply have a conversation with their followers. Here's how it works;

In addition to this feature, Twitter announced a new way to earn money from its platform 'Twitter Spaces' by adding several new upcoming features including scheduling, co-hosting with up to two other users, and ticketed events. Ticketed Spaces will allow hosts to set ticket prices and quantity. Spaces host can decide the price and number of participants/tickets participants will allow in spaces, Twitter Spaces the host can Co-Host show with other users and share the revenue. Everyone can listen to Spaces on iOS or Android and anyone with 600+ followers can host spaces.

If you found this feature quite interesting? How you feel about this feature let us know via the comment section below.