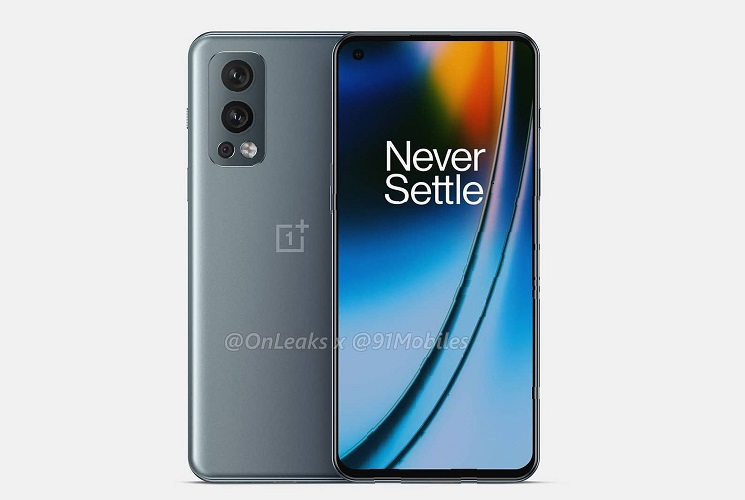 OnePlus Nord 2 5G new leaked renders show the first look at the upcoming smartphone. The Nord 2 is set to come as the successor to the OnePlus Nord that launched last year and is expected to debut next month. OnePlus Nord 2 alleged renders have surfaced showing the rumoured smartphone with a triple rear camera setup and a hole-punch display. The renders were shared on Monday by tipster Steve Hemmerstoffer aka @OnLeaks, who also revealed some key specifications of the smartphone earlier this year. The news comes soon after the information on the SoC of the smartphone was leaked by a listing on the AI Bechnmark website. The phone is reported to debut sometime in July with Mediatek Dimensity  1200 SoC, and an AMOLED display with a 90 Hz refresh rate.

OnePlus Nord 2 specifications could include a 6.43-inch FHD+ AMOLED display with a 90Hz refresh rate and probably an in-display fingerprint sensor for security. The phone is expected to be powered by the MediaTek Dimensity 1200 SoC coupled with up to 12GB RAM and 256GB storage that may not be expandable. It is said to have triple cameras on the back, with a 50MP primary sensor, an 8MP secondary lens, and a 2MP sensor. The phone is said to get a 32MP snapper on the front for selfies and video chats and pack a 4,500mAh battery that may get 30W or 65W fast-charging support. It is likely to boot Android 11 OS out of the box and connectivity options could include 5G, 4G LTE, dual-band Wi-Fi, Bluetooth, GPS, and USB Type-C port.

Check out the leaked specifications of the new OnePlus Nord 2 5G smartphone;

OnePlus Nord 2 priced in India at Rs.29,999/- (Expected) and the phone is expected to launch in India on 09 July 2021 and comes with 8GB RAM and 128 GB internal storage variant.
Hello! Welcome to techbard.in Techbard.in is an "Indian Top Tech News Website"- This Blog completely dedicated to the Latest Tech News, Tech Updates, How-To's from all Top Sources in an…