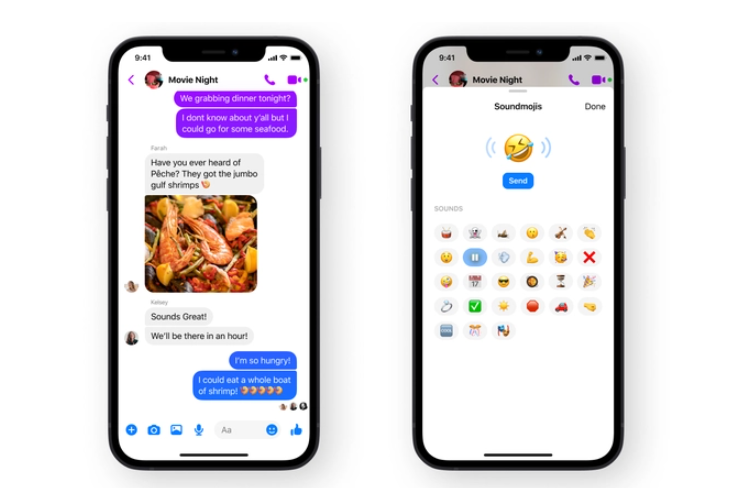 Facebook Messenger launches Soundmojis to facilitate communication in conservations which is a combination of Emojis + Sounds = (Soundmojis). The new feature allows over  2.4 million Facebook users to send brief sound snippets to their friends, adding more expressiveness to messages. Different Soundmojis range from clapping 👏, crickets 🦗, drumroll 🥁 , and evil laughter 👻, to audio clips from artists like Rebecca Black and TV shows and movies like Universal Pictures’ F9, NBC, and Universal Television’s Brooklyn Nine-Nine, and Netflix and Shondaland’s Bridgerton. “Ah, the drama of it all.” The new function will be released on July 17 ahead of World Emoji Day.

Social Media Giant Facebook brings a new feature to Messenger called the "Soundmojis" which will release on July 17, which will be the delight of some Soundmojis people, who remember with nostalgia the old service of the same name that had the emoji function with sound. If that same, we were talking about the late MSN Messenger, which for many remains one of the best of all time. And it's that Facebook will now allow users to send some emojis with default sounds in their Soundmojis function, to seek to enrich the messaging of the company. Soundmojis's starting library includes soundtracks for standard emoji that include applause and drum rolls as well as evil laughs, but still, Soundmojis, have no vibration.

How to add Soundmojis on Messenger?

To add Soundmojis on Messenger;

The Soundmojis will dynamize our experience by communicating with our contacts through this important tool. This Facebook ad about incorporating sound emoji for your Messenger has sparked the curiosity of many. According to Facebook, every day, people send more than 2,400 million emoji messages on Messenger. A figure that impresses anyone by understanding the size of that social network. No doubt emojis add color and vitality to Messenger chats throughout.
Hello! Welcome to techbard.in Techbard.in is an "Indian Top Tech News Website"- This Blog completely dedicated to the Latest Tech News, Tech Updates, How-To's from all Top Sources in an…