Google has announced a new feature “Play as you Download” for Android 12, will let users play games even before download completes 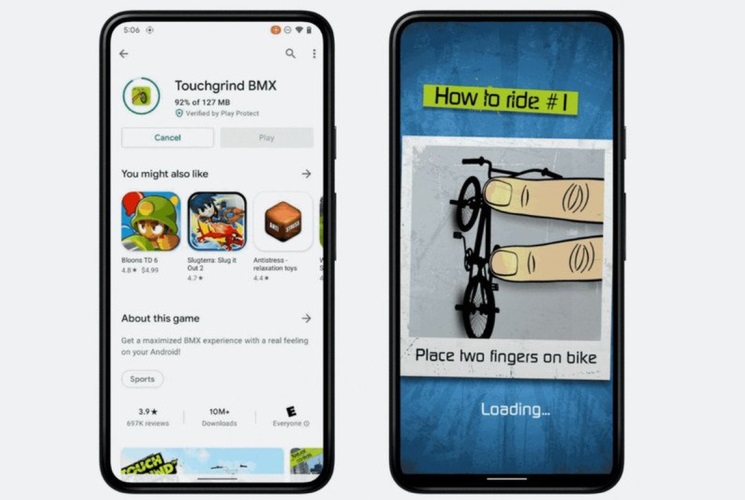 Google has announced a new feature called “Play as you Download” for its upcoming Operating System, Android 12. The news comes from the Game Developer Summit 2021 event that is going on from 12 July to 13 July.

The company claims that users with Android 12 version will be able to play games already at 18% download. Also, the feature will not require developers to adapt games like for Instant Apps. The apps in the same format can provide this facility as the AAB format app will first download the files required for running. Also Google reported that after August, all apps will gradually shifts from APK to AAB format in Android 12 version. Moreover Google Play Games will support game optimization feature this time, developers will also get good benifits by increasing the API in Game Development Kit. Google's example GIF shows a game name Touchgrind BMX game with a size of 127MB, the game hasn't finished

Google introduced Android 12 test version this May at the Google I/O online conference for developers. The operation has changed not only the design, but also the privacy settings - a badge appears on the screen when working camera and microphone. The system has appeared the function of approximate geolocation instead of accurate, support of the smartphone as a remote to TV console on Android and the electronic key of the car.

Android 12 Beta 1 has been released on Pixel smartphones (starting with Pixel 3) as well as Asus, Sharp, OnePlus, OPPO, Xiaomi, Realme, Techno, TCL, Vivo and ZTE devices. The final version of the operating system will be released in the fall of this year. On July 12, Google presented the "Play as you Download" feature. Supporting this Android 12 game feature will be launched after 18-20 % of content is uploaded. The technology is based on the Incremental FS file system, so it will appear only on Android 12. According to Google, game developers won't need to adjust games to this technology - it's easy to download the app on Google Play. When downloading, the system will set the priority of the download required to quickly start the game. Google is currently recruiting developers for testing Play as you download BETA.