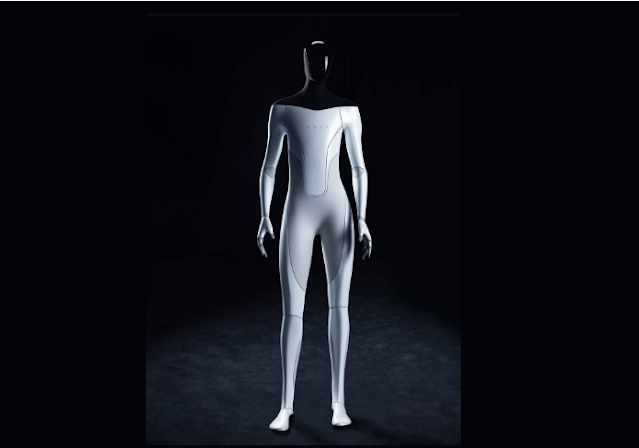 During Tesla's AI day event, Elon Musk, announced that Tesla is working on a first prototype called  "Tesla Bot", a humanoid robot that, through the use of technologies of Artificial Intelligence, may help "eliminate the dangerous, repetitive or boring jobs" that are done by humans today and it will be "friendly", Elon Musk assured.

Musk defined Tesla as the world's largest robot company considering its ability to see, understand and act according to this information and pointed out that the next step is humanoid robots. "If we don't, someone else will do it" so we should and make sure it's safe Musk said that Tesla Bots won't be absolutely threatening, can't run as fast as a human, and won't become stronger than a human.

Here are the main features of the robot announced during the Tesla Bot presentation: 1,72 Weight: 56 High speed: 8 km/h Many are found in Tesla vehicles today, built with 40 ElectroMechanical Actuators - Arms (12), Neck (2), Torso (2), Hands (12), Legs (12) also including the FSD computer that will get data from a very similar sensor group in cars will share the technology. On this front, Tesla is working with well-known roboticist Dennis Hong, who specializes in humanoid robots which will launch its first prototype in 2022.

"It should be able to, you know, please go to the store and get me the following groceries, that kind of thing," musk said. "Tesla is certainly the most important robotics company in the world, because the cars are semi-conscious robots on wheels, with an on-board computer dedicated to autonomous driving," said Elon Musk at an event. online on his group's advances in artificial intelligence. “It makes sense to give it all a humanoid form,” he added.

Here are the complete Tesla Bot Specifications which was unveiled by Elon Musk during Tesla's AI day event;

The humanoid robot should be "friendly"

Elon Musk for several years has warned that states have to regulate Artificial Intelligence, because this may be the greatest threat to the existence of human civilization. He said, moreover, that governments cannot wait until there are robots killing people on the street to move forward with regulation. But what is the importance of discussing Artificial Intelligence (Al) regulation? Artificial Intelligence is based on data (algorithms) that bring a reflection of human history. Most times these algorithms result in mathematical and non-ethical decisions, replicating and exposing unfair verses of today. That is, the same technology that facilitates diverse day-to-day activities can also result in discriminatory decisions and behaviors. The quest for transparency and chance to question the action algorithms gained weight reinforcement in April this year when the European Union submitted a proposal for legislation to define the use of artificial intelligence in its countries. The document divides technology into three classes: low risk, high risk, and unacceptable. Low-risk use basic algorithms, such as social media and streaming, and should keep their working method clear. High-risk ones can be implemented if they prove their safety and transparency, such as automated systems that select job applicants. Unacceptable risk will be prohibited throughout the territory, case of social scores established by machines, as a list of potential criminals. Finally, the debate is broad, but the fact is that we have to find balancing technological advances with preserving fundamental rights and guarantees.

The Tesla Bot will be "friendly" and you can "run away from it faster than it seems," joked Elon Musk. He also spoke of "profound implications for the economy", since "the economy is based on work". He thus envisions a world where physical effort will no longer be compulsory, but “a choice”.

The second richest man in the world according to Forbes, Elon Musk has created other start-ups:  SpaceX, which has become the world's first private rocket launch company, and Neuralink, which specializes in brain implants. He believes in the risk that artificial intelligence will compete with human civilization and hopes, thanks to Neuralink, to achieve a "symbiosis" between humans and these technologies.