Spotify Plus: Spotify is testing a cheaper 'Ad-Supported Subscription' that costs $0.99

Spotify Plus- Ad-Supported Subscription- Spotify Plus brings key Spotify Premium features at just $0.99 a month- Spotify is exploring an ad-supported 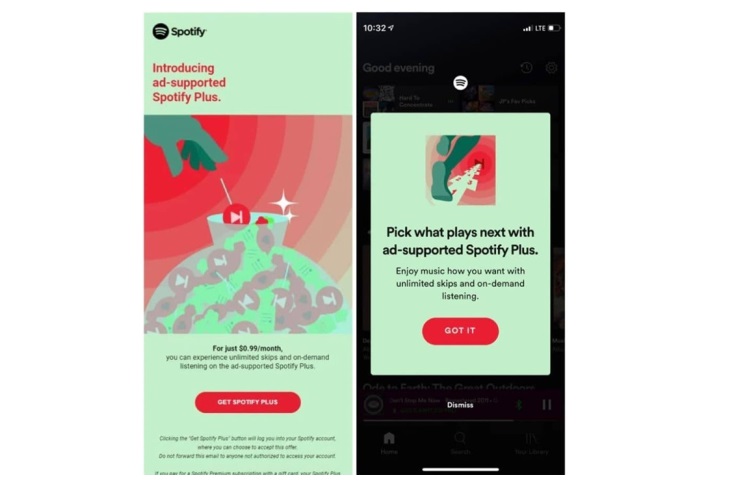 Spotify is now one of the most famous music streaming and podcast services. Moreover, Spotify can also be accessed for free despite the limitations presented to those freebies. But just now Spotify is secretly testing out a new Ad-Supported subscription feature called "Spotify Plus".
Spotify Plus itself comes as a cheap-cost subscription option to eliminate track skip limits. If free users are given a limit to skip songs up to 6 times in 1 hour, with Spotify Plus being bombarded US$ 0,99 per month the user can freely play any song without any limitations at all.
However, it is mentioned that this Spotify Plus will still bring advertisements to its users. But it can be understood considering Spotify Plus's own subscription prices are very cheap. Certainly, this becomes one of Spotify's efforts to attract users to subscribe to their paid services. Indeed, by having a Premium subscription, the user will be given many benefits especially those who often use it.
The price, in the region where it is available, is $0.99 (Rs.73.44/- INR), it is still based on ads, but it already allows the user to access some Premium plan features, such as unlimited jumps between tracks. It is, for now, an experimental plan.
The new monthly subscription plan was first spotted by The Verge at a cost of $0.99 (₹73.44) which is very less than a dollar. Firstly it is a pilot program, merely in the testing phase, but which could be made available globally by the Swedish company.
Spotify Plus: Ad-Supported Subscription stands out for its low price which is as low as a dollar (0.99 $) (Rs.73.44/- INR) - compared to plans currently available in India- ₹165, ₹199, ₹719 for Student, Individual, Duo and Family packages, respectively. It's a fraction of the asking price for any Premium mode.

What features come with a Spotify 'Ad-Supported Subscription':

These are the benefits that come with the Spotify 'Ad-Supported Subscription' subscription;
By subscribing to the Spotify Plus plan, the user will have access to the basic functions of the Premium plan. Among these stands out, for example, the possibility of making unlimited skips - the possibility of skipping as many tracks as you want in the space of an hour. Remember that in the free version it is only possible to make 6 skips (skips) of tracks on Spotify.
Additionally, with Plus, the user can choose any track he wants in this music streaming service. These are the two advantages of the Plus plan compared to the free version, and it is currently being tested with some users.
Hello! Welcome to techbard.in Techbard.in is an "Indian Top Tech News Website"- This Blog completely dedicated to the Latest Tech News, Tech Updates, How-To's from all Top Sources in an…