Amazon Prime Video app is now available on macOS; Here's how it works? 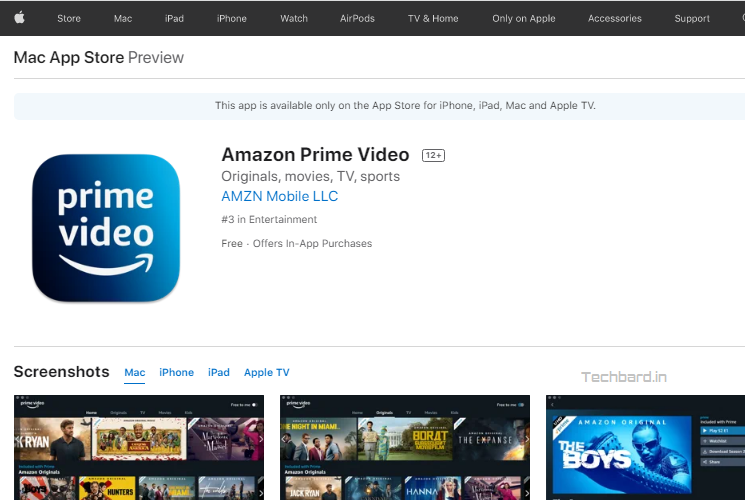 Amazon Prime Video now has an official app for macOS -Amazon is constantly working overtime for Prime Video. The company recently announced the ability to receive and share 30-second clips for iOS users. Amazon has finally released a native Prime Video app for devices running macOS via the Mac App Store. The app is available on Mac App Store for download (here). Subscribers to the service will be able to log into the app to watch online or download the content to their Macs for later viewing when they are off the internet. Prime Video users can download the app on MacBooks for free. All Amazon Prime content that is available on the iOS and Android app of the streaming app will be available on the macOS app as well

According to the company, all Amazon Prime content will be permanently available through the Apple desktop application. In addition, the devices must have exclusive features such as Picture-in-Picture and AirPlay, as is already the case on iOS. Support will also be provided for in-app purchases for on-demand content rental and credit card payments already registered with Amazon.

There will also be support for the so-called "Crossplay", a feature that allows you to start watching on one device and finish viewing on another, restarting from the exact spot where it was interrupted. As with the app for cell phones and smart TVs, it will be possible to create several profiles so that everyone in the house can watch their favorite programs in an organized way, without influencing the tastes of others.

The Prime Video application, which is also successful incompatibility, works seamlessly with both Intel and M1-based Macs as it was created with Apple's Catalyst support. It should be noted that the compatibility in the operating system is not as much as hardware support, it can run on macOS 11.4 Big Sur and later versions.

According to the company, these are the features that are added to the Amazon Prime Video native app for macOS:

The Amazon Prime Video app is free, supports macOS Big Sur 11.4 or later, and can be downloaded directly from the Mac App Store.
Hello! Welcome to techbard.in Techbard.in is an "Indian Top Tech News Website"- This Blog completely dedicated to the Latest Tech News, Tech Updates, How-To's from all Top Sources in an…