Microsoft starts rolling out a new Media Player for Windows 11 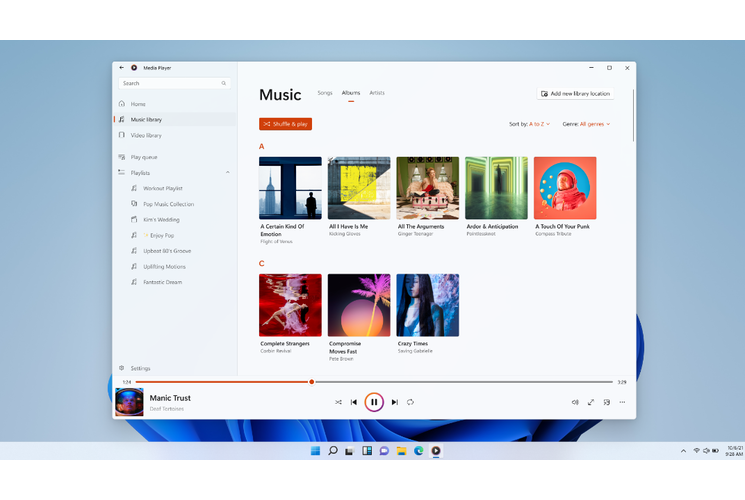 Microsoft starts rolling out a brand new version of Windows Media Player, which will now simply be called “Media Player” and it is made available to Windows Insiders on the Dev Channel. The new app replaces Groove Music and Windows Media Player. The revamped Media Player application comes with a design that adapts to the interface improvements of Windows 11 while continuing to play audio and video.

Playback view in this new Media Player will include album art or artist images that will appear in both full-screen modes and the mini-player option. Media Player will also support videos rendered in the Movies & TV app, usually in Windows 10 and Windows 11.

However, all your content in the music and video folders on your computer will automatically appear in your library, but it is possible to add additional content to the Media Player through the settings. The revamped application will replace the old Windows Media Player application that is in Windows 11 today. Microsoft says this legacy app will continue to be available in Windows Tools. However, it seems that the new Media Player for Windows 11 will soon be the primary way of watching videos and listening to music in the operating system.

Microsoft nevertheless specifies that you will still be able to download the old reader via the “Windows Tools”.

According to the Microsoft;

Media Player includes full support for browsing, managing, and watching your local video collection too! All your content in the music and video folders on your PC will appear automatically in your library, but you can also tell Media Player where to look for additional content in-app settings. We have also optimized for accessibility, with improved keyboard shortcut and access key support for keyboard users and with other assistive technologies.

The software giant is starting to test the new Media Player app with Windows 11 devices on Dev Channel today, and it hasn't been specified when it will be available to all users.

If you want to test it right now, it's very simple:

Media Player should be in the store. Obviously, at this stage, the program remains in beta. It may therefore still have some bugs. Microsoft says it is aware of an issue that may prevent reading from network locations. Under certain circumstances, editing an album's metadata, sorting the library with accented characters can cause playback problems.
Source: Windows Insider Blog
Hello! Welcome to techbard.in Techbard.in is an "Indian Top Tech News Website"- This Blog completely dedicated to the Latest Tech News, Tech Updates, How-To's from all Top Sources in an…