Qualcomm Snapdragon 8 Gen1 Officially Launched as the Top-Of-The-Line Chipset (SoC) for upcoming Android flagship phones such as the Xiaomi 12, Realme On the first day of the Snapdragon Tech Summit 2021, Qualcomm officially announced the new high-end Snapdragon 8 Gen 1 processor (SoC) for upcoming Android flagship phones such as the Xiaomi 12, Realme GT Pro 2, Motorola Edge X30. It is a direct successor to the Snapdragon 888 and it will be significantly faster and more efficient.

The new Qualcomm 8 Gen1 SoC comes to improve six features which include: 5G Connectivity, Camera Sensors, AI, Gaming, Audio, and Security which are just the most important components today when we seek to acquire a new Android smartphone. 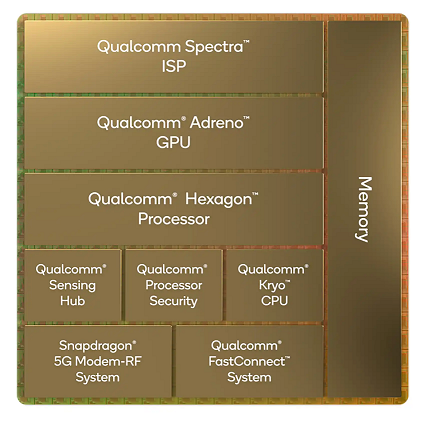 It is manufactured in 4nm and is the first Qualcomm processor to be built under the Armv9 architecture. The Kryo CPU has a first 3.0GHz Cortex-X2 main core, three Cortex-A710 cores that clock at 2.5GHz, and four Cortex-A510 cores that stay at 1.8GHz, regarding the performance offered by this new chip, the American company advises that it has been improved by 20% in power and 30% in efficiency compared to its predecessor.

The New Adreno GPU that promises a 30% improvement in graphics rendering and a 25% improvement in energy efficiency. Qualcomm has developed three Elite Gaming features, one of which allows developers to strike a balance between performance and power efficiency.

The Adreno Frame Motion Engine enables the GPU to render a game at twice the frame rate while using the same amount of power. Alternatively, it can halve the power draw while keeping the FPS the same. Another new feature is desktop-class volumetric processing. Volumetric lighting uses it for dramatic lighting effects. Also new is Variable Rate Shading Pro, an image-based VRS that should make it easier to integrate VRS into more games. Qualcomm has even partnered with some of the biggest game developers to ensure their games get the most out of the hardware.

Snapdragon 8 Gen 1 receives the new Spectra 680 Image Signal Processor with memory bandwidth increased to 3.2 Gigapixels per second and allows video recording support to increase to 108 MP at 30 FPS. It can also shoot 8K HDR and capture 64 MP images at the same time. Other configurations include supporting three 36MP cameras together and recording 30 FPS videos. The Spectra 680 ISP can also capture 240 12MP images in one second, while the new Ultrawide Engine prevents your images from looking distorted. Alongside this, Qualcomm introduced a video super-resolution for zooming purposes.

Qualcomm's seventh-generation AI Engine technology allows the Snapdragon 8 Gen 1 to achieve a performance increase of four times, or 400 percent, compared to the previous generation. It also has twice the speed of Tensor acceleration, twice the shared memory, and uses 1.7x less power than the AI ​​engine in the Snapdragon 888.

The Snapdragon 8 Gen 1 has an integrated X65 5G modem that supports both sub-6 and mmWave operation and can theoretically deliver 10Gbps speeds. For the first time, the modem also supports carrier aggregation for upload. Local connectivity benefits from Bluetooth improvements as well as Wi-Fi 6 and 6E support. The new chip can stream CD Lossless Audio over Bluetooth LE. It also supports Bluetooth LE Audio, which represents a huge advance over current technology. The Broadcast Audio feature allows a source to broadcast one or more audio streams to an unlimited number of receivers. Stereo recording is also supported, along with audio back channels.

Qualcomm has also worked to improve the security of the chip by introducing the Trust Management Engine, which will sit under the hypervisor (introduced with 888). Thus, TME remains secure even if the security zones on it are compromised.

The first flagships powered by Snapdragon 8 Gen 1 will launch before the end of the year. Announcements of these devices are expected soon.