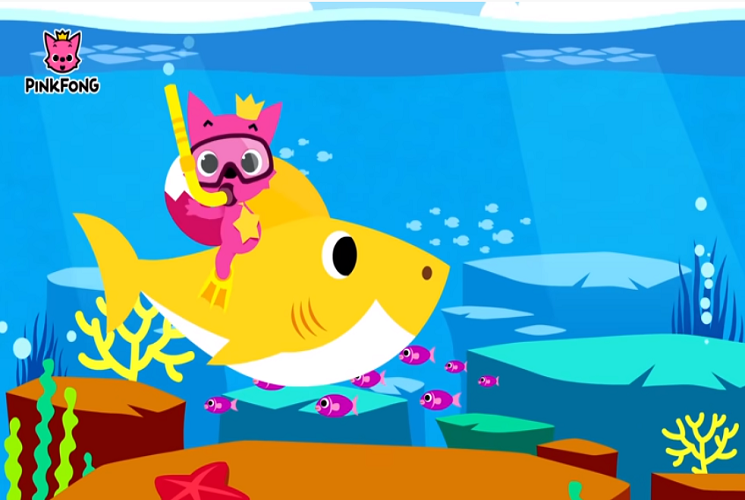 The children's song was created by the South Korean educational company Pinkfong and performed by Korean-American singer Hope Segoine. "Baby Shark" debuted in June 2016 and was a viral hit in Asia, but it didn't break into the collective consciousness of Americans until 2019, and has led to a franchise including an animated series, global merchandise licensing program, live tours, interactive games, and NFTs.

Since then, it's been a Nickelodeon TV show, a live show, and even the rallying cry of the Washington Nationals throughout their World Series-winning season. You can watch the video for "Baby Shark" video here.

Nickelodeon has not only renewed its "Baby Shark" show but promised a feature film. There is even a collection of NFT's with moving images, which you can learn about at this link and merge two Internet trends. In fact, "Baby Shark" hit Billboard's Top 40 at one point and inspired Jamie Tartt's chant on Apple TV+'s "Ted Lasso."

YouTube's most-viewed video shows two real children demonstrating the "baby shark dance" as the titular animated shark and his family, including a mustachioed grandfather shark, swim serenely and then attempt to hunt the children. But, they fail and the kids celebrate their safety as the sharks watch from afar, fork in fin.

Apparently, this level of success was not even imagined. In 2019, Pinkfong's US CEO Bin Jeong said the company didn't expect the clip to take off the way it did.

Now, to celebrate the latest "special milestone," Pinkfong invited kids from around the world to share their "Baby Shark Dance moments" with the company.