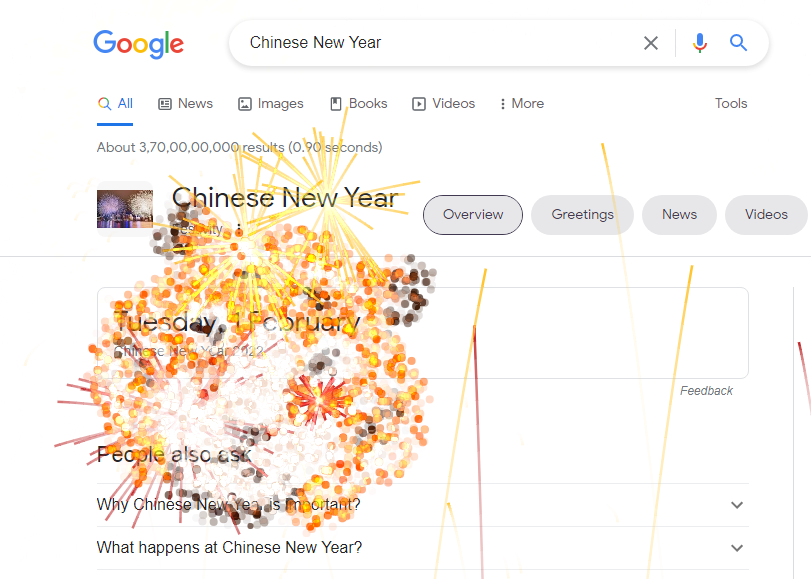 Chinese New Year officially begins on February 1st, 2022, Google Search has added a new Easter egg to celebrate the Year of the Tiger 2022. Finding the easter egg is so easy: If you search for "Chinese New Year," "Year of the Tiger," or even "Lunar New Year" on Google.com right from your desktop, tablet, or smartphone, the search page will initially load with fireworks begin to gently pop on the screen, forming the animal that represents the Year of the Tiger 2022. In addition, there is also a button to share the news on social networks.
Chinese New Year, also known as Lunar New Year or Spring Festival, is just around the corner. Chinese New Year or Lunar New Year 2022 will fall on Tuesday, February 1st, 2022, starting a year of the Tiger.
The date of Chinese New Year changes every year, but it always falls between January 21st and February 20th. The date is decided by the Chinese Lunar Calendar, which is based on cycles of the moon and sun and is generally 21–51 days behind the Gregorian (internationally used) calendar.
2022 is a Year of the Tiger according to the Chinese zodiac. The 12 animals consist of Rat, Ox, Tiger, Rabbit, Dragon, Snake, Horse, Goat, Monkey, Rooster, Dog, and Pig.
More specifically, 2022 is a Year of Water Tiger, starting from February 1st, 2022, and lasting until January 21st, 2023, and recent/upcoming years of the Tiger are 1938, 1950, 1962, 1974, 1986, 1998, 2010, and 2022.
However, Google's search engine is not alone to celebreate this, in fact: the Emoji Kitchen by Gboard, Google's virtual keyboard, now has mixtures of emojis with the tiger. The animal now has a series of unique and fun expressions to spice up the conversation, just like the turtle, sloth, kitten, and the various other animals.
Hello! Welcome to techbard.in Techbard.in is an "Indian Top Tech News Website"- This Blog completely dedicated to the Latest Tech News, Tech Updates, How-To's from all Top Sources in an…