RIP Popcorn Time: The ‘Netflix of piracy’ is completely dead

RIP Popcorn Time: The ‘Netflix of piracy’ is completely dead an alternative to watching series and movies online for free, as easy as Netflix has dead 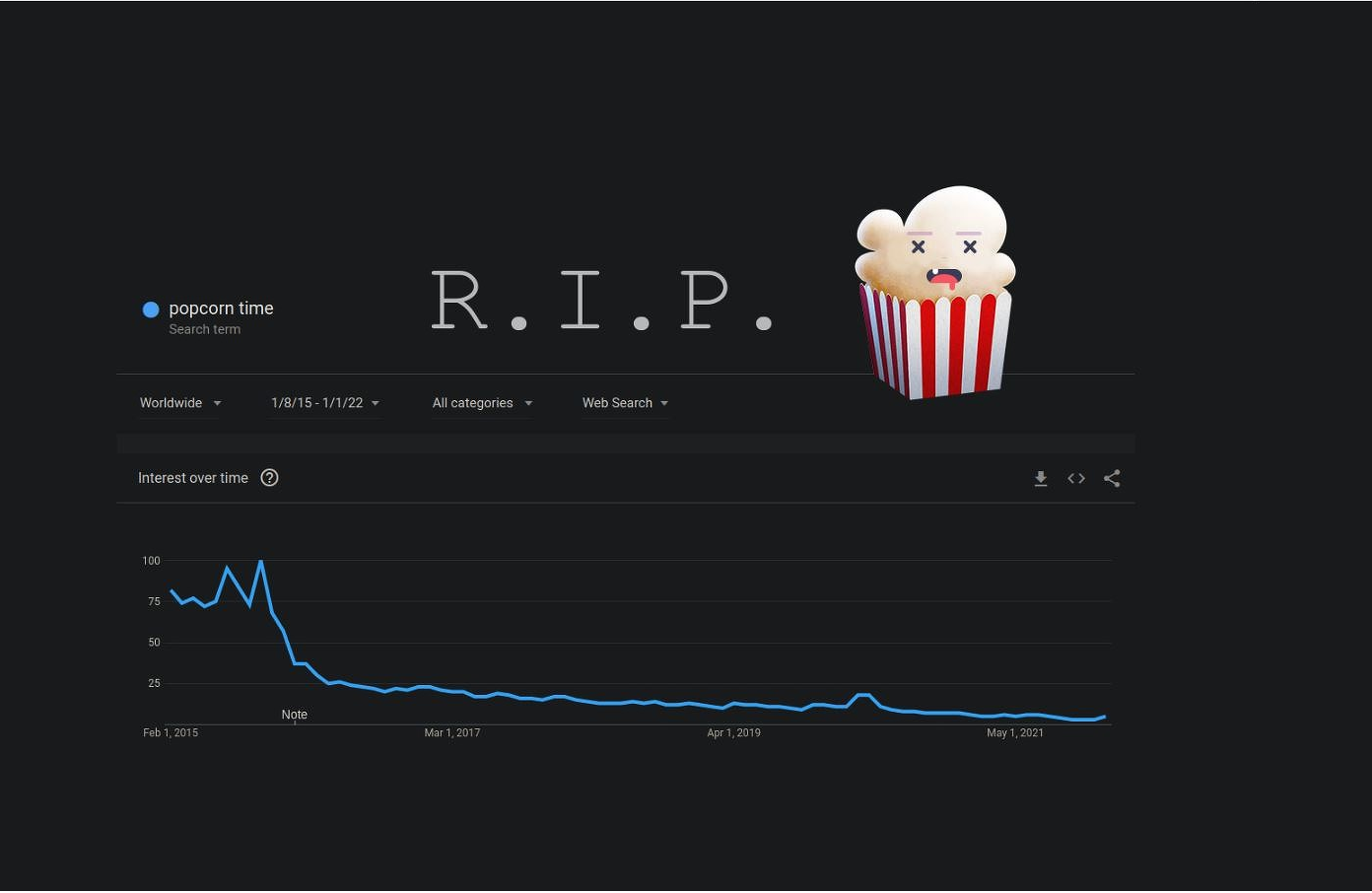 Popcorn Time is completely shut down. The popular app "Popcorn Times", an alternative to watching series and movies online for free, as easy as Netflix, has died completely [R.I.P]. Accessing Popcorn Time's website shows the cover image and the group responsible for the app notified the final closure of the platform, after nearly six years of illegal content streaming activity. The developers have confirmed to the TorrentFreak portal that the closure of the service is dictated precisely by the rapid decline in its popularity. In total, it existed for eight years - from the beginning of 2014.
The news of the closure of Popcorn Time, most likely, delighted numerous copyright holders. They tried to fight with services from the earliest days of its existence.
More than anyone else, the Motion Picture Association of America (MPAA), which represents the business interests of major filmmakers, wanted to rid the world of Popcorn Time. She made her first attack on the service back in March 2014, at the dawn of its existence.
From the very beginning, the developers placed the application source code on the GitHub platform, from the summer of 2018 to the present time owned by Microsoft. In March 2014, the MPAA complained about Popcorn Time to the GitHub administration and demanded that its repositories be blocked.
The MPAA also threatened the Popcorn Time developers with a lawsuit, which forced them to leave the project in 2015. But the original project code served as the basis for several forks, which were backed by independent developers.
At that time, the largest successor to the original Popcorn Time was the popcorntime.io project. MRAA reached him - in early 2015, she filed a lawsuit against its creators, and by the fall of the same year, work on the project was stopped.
In 2016, the original Popcorn Time service was revived. The developers have posted on its official website distributions of the program for Windows 7 and Windows 10, 32- and 64-bit Linux distributions, as well as software versions for macOS, Android and Android TV.
The MPAA had been preparing for a new blow to Popcorn Time for several years and delivered it in early May 2020.The Association sent the GitHub administration a request to block developer repositories, which the platform owners were quick to satisfy.
The Popcorn Time developers filed a counterclaim on the MPAA complaint and action on GitHub on the same day. They demanded to unlock and restore all repositories.
GitHub eventually sided with Popcorn Time. The developers managed to prove that the blocking has no legal basis, as well as the filmmakers' complaint. As a result, at the end of May 2020, access to the project's repositories was restored in full.
Experts at the reputable portal Vice do not agree that the Popcorn Time project has become a part of history. This opinion, in particular, is shared by Jason Koebler (Jason Koebler). He stated that the service will live as long as the global network exists.
Kobler supported his opinion by the fact that Popcorn Time was closed several times during its eight years of existence, but soon revived in a new version authored by new developers.
Kobler added that the very concept of the project (a torrent tracker with a built-in player) will not let him die completely. However, he did not give an approximate date for the return of "Pirated Netflix."

What is Popcorn Time

Popcorn Time has been available on a wide variety of platforms. Popcorn Time cannot be categorized as classic online cinemas, since it is not a web service, but a separate application, albeit with a design that mimics sites for watching movies and TV shows. In fact, it is a program that combines the functions of a torrent client and a media player and is distributed free of charge.
Popcorn Time users could watch any movies and TV shows they were interested in.Popcorn Time allows you to search for movies, TV series and other video content on torrent trackers from all over the world. One of the features of the service is the ability to watch videos "on the go" without waiting for it to be fully loaded.
In early 2015, a year after its launch, Popcorn Time became one of the world's most popular services for accessing illegal video content. In the same 2015, the main development team left the project, but since its code was distributed in open source, third-party programmers joined the support of Popcorn Time.
Hello! Welcome to techbard.in Techbard.in is an "Indian Top Tech News Website"- This Blog completely dedicated to the Latest Tech News, Tech Updates, How-To's from all Top Sources in an…