Twitter is now available on the Dark Web Tor Onion network with a dedicated website link: .ONION Link is here which will allow access to site anywhere 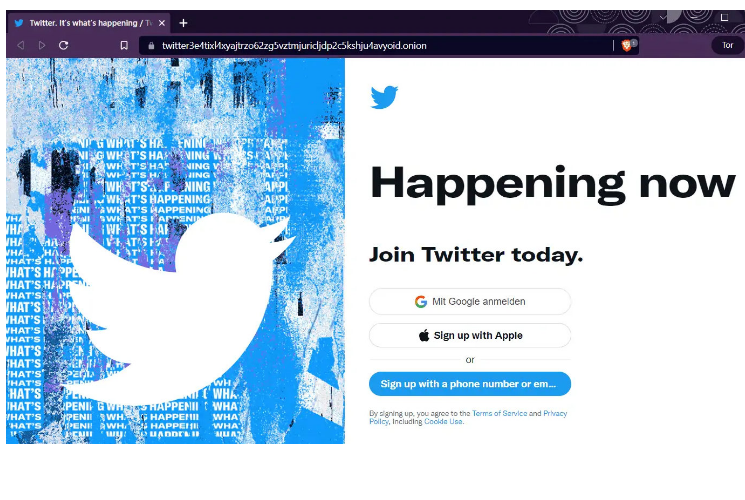 Blocked by the Russian government, Twitter has entered the Dark Web and people can now access the platform via a Tor Onion service with a dedicated website, which will allow access to the microblogging and social networking site from anywhere in the world with enhanced security and availability, even in those countries where it has been banned and/or blocked.

The dedicated URL for Twitter on the TOR network is:

The natural access is to use the TOR Project browser, a custom Firefox that can be used to browse the web anonymously and access these special .onion domains that only work on top of the Tor network. The project is especially useful for bypassing the government censorship and continuing to access blocked sites in your country. That is if the TOR network itself is not blocked, something that Russia has been trying since last December, surely preparing what was to come.
The launch of Twitter on the TOR network comes at a time when the invasion of Ukraine continues to monopolize the world's information. Russia has arrested thousands of its citizens simply for peacefully demonstrating against the war and has threatened journalists with up to 15 years in prison for spreading "fake news". This has caused the disbandment of Western media and the closure of the few official Russian media that provided "alternative" information. Alternative to that of the Kremlin that has hit an informative bolt in the press, television, and also on the Internet.
The social network has been accessible on TOR for a long time, but support for a dedicated .onion website takes it to another level.  Alex Muffett, the security engineer who helped Twitter create the site on Dark Web, has posted details on the benefits of providing a specific site rather than simply allowing connections through TOR Network and it is that the ONION sites improve the authenticity, availability, and security of the sites in the TOR network.

This is possibly the most important and long-awaited tweet that I've ever composed.

On behalf of @Twitter, I am delighted to announce their new @TorProject onion service, at:https://t.co/Un8u0AEXeE pic.twitter.com/AgEV4ZZt3k

Clicking or typing the address on the specific URL created for the website ensures proper access and mitigates rogue Tor address attacks that are also rife. Using these dedicated sites has other benefits, including the ability to bypass regional or national website blocks, protect against DNS censorship, and man-in-the-middle TLS man-in-the-middle attacks and SNI filters.
Russia ranks second in terms of the number of users using this decentralized network. In the face of TOR blocks, the Electronic Frontier Foundation (EFF) set up the mirror site at https://tor.eff.org/ and volunteer groups have also contributed over 1,000 additional Tor bridges that are currently not blocked, allowing access to the Tor network and counter government censorship.
Hello! Welcome to techbard.in Techbard.in is an "Indian Top Tech News Website"- This Blog completely dedicated to the Latest Tech News, Tech Updates, How-To's from all Top Sources in an…