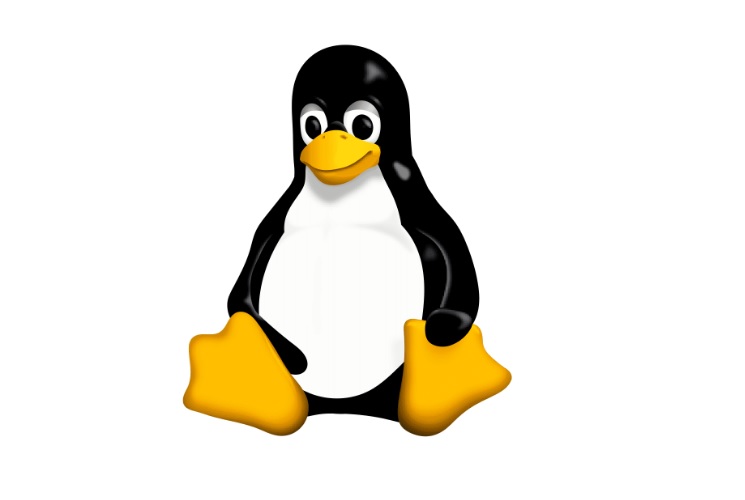 Security and privacy have become two areas of concern for more and more users. The remarkable amount of data breaches of which even reputable services have been victims, the increasingly aggressive actions of malicious actors and intelligence agencies, and the constant increase in threats against systems and users have aroused a growing demand for products that offer security and/or privacy.

Nowadays we have the greatest demand for cybersecurity experts who are responsible for verifying the virtue of systems and carrying out tests to ensure that they are secure. The operating systems oriented to this segment have seen their demand increase enough to begin to compete not only with each other but also with general-purpose operating systems, although always without losing their focus (after all, they continue to target a very specific audience).

However, we have solutions aimed at providing security and/or privacy to the user, or what comes to the same thing, operating systems aimed at offering protection tools. Here we find two complementary possibilities depending on whether privacy or security is sought. For the first thing, what is usually done is to anonymize the traffic using Tor or some VPN solution. For the second, there are several ways, but the most common is to resort to isolation (sandbox) through virtual machines.

To what has been mentioned so far, we must add the concern generated by Windows and Android, the two most used operating systems. The first started to introduce aggressive telemetry mechanisms in its version 10 that have aroused the ire of privacy advocates. Second, despite using the Linux kernel and initially being free software, the vast majority of implementations provided by mobile manufacturers are proprietary and pre-install Google services.

On the other hand, we cannot forget the use of a default administrator account in Windows, a detail that ends up being a highway for malicious actors even today. Changing the account that is used by default in Windows for another common user is vital to reinforce privacy, but when it comes down to it, it is something that very few do, so, in the end, it ends up being better to use a system that puts that in order from the beginning and not as a configuration to be done after the installation of the system.

Seeing that Linux is a system closely linked to privacy and security, In this article, we'll look into the top 5 Best Linux Distros for Privacy-Focused Users - 2022.

Here in this article, you'll know the 5 best Linux Distros for Privacy-Focused Users - 2022 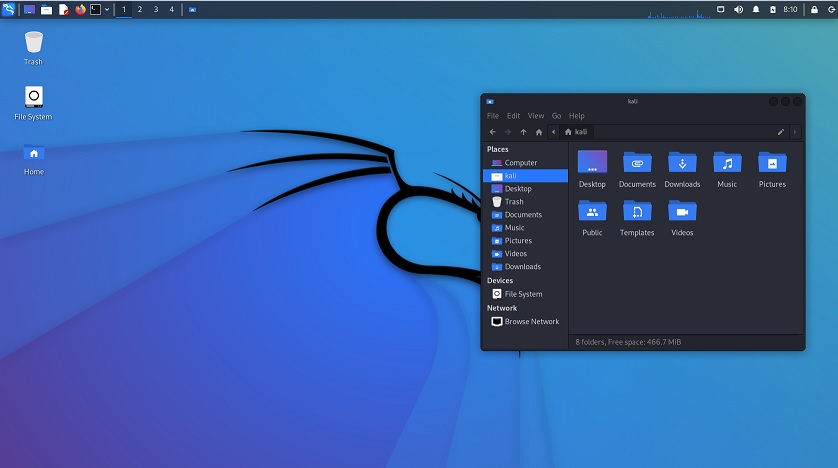 Kali Linux, the best-known operating system in the world of hacking is a Debian-derived Linux distribution designed for digital forensics and penetration testing. It is maintained and funded by Offensive Security.

The popularity of Kali Linux has surpassed the field of security, so in recent times it has been taking steps to be a system that can be installed and used locally and normally on a PC, just as it would be done with Linux distributions. general-purpose like Ubuntu, Fedora, Debian, Arch Linux, or Manjaro. This is also reflected in its aesthetic finish, increasingly elaborate and attractive.
Kali Linux provides a large number of tools and applications to perform penetration tests and test the security of systems. 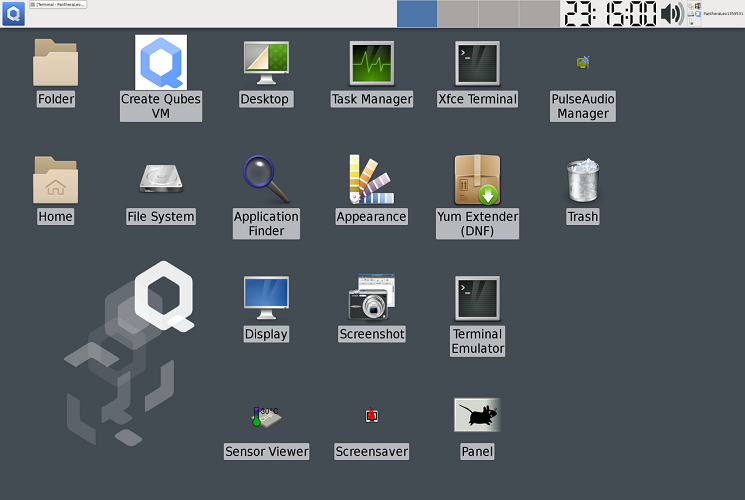 Qubes OS is another best Linux distro and is a security-focused desktop operating system that aims to provide security through isolation. Virtualization is performed by Xen, and user environments can be based on Fedora, Debian, Whonix, and Microsoft Windows, among other operating systems.
Qubes OS uses one of the most popular resources to create isolation: virtual machines. More specifically, what it does is make available several virtual machines with different profiles managed by the Xen hypervisor. While this may sound complex, in practical terms what it does is make it as easy as possible to use the Xen hyperdrive to achieve an isolated environment.
The use of virtual machines allows the developers of the system to define and limit the resources and means to which each one can access, thus creating an isolated environment in which the impact of damages or losses is limited in case it is affected by a cybersecurity incident.
Virtualized environments running on Qubes OS do not have to be instances of the same operating system but can be based on other distributions such as Debian, Whonix, Gentoo, and even Microsoft Windows. 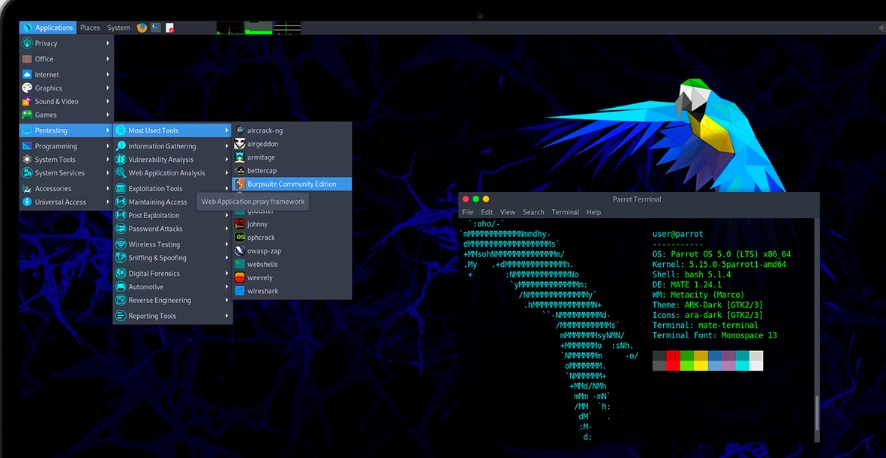 Parrot OS is a Linux distribution based on Debian with a focus on security, privacy, and development compared to other Linux distros this Debian-based distribution is more focused on security testing and pentesting and incorporates software that helps with tasks such as reverse engineering and digital forensics. Parrot OS is based on Debian's "testing" branch, with a Linux 5.10 kernel. It follows a rolling-release development model. Parrot OS is better in terms of offering an easy-to-use interface and tools, which can be grasped easily by beginners. However, both Kali Linux and Parrot OS provide learners with a bunch of tools they can make use of
But Parrot OS not only includes tools to test the security of other systems, but it also incorporates profiles and hardened settings for AppArmor (a security module for the rival Linux kernel to SELinux) and other hardening technologies as its own layers of security.
As privacy-oriented technologies we find the well-known Tor or Onion Router to anonymize traffic, Onion Share as a utility for sharing files through the Tor network, and AnonSurf, a utility that channels communications from the operating system through the network Tor to anonymize all networks, applying, among other things, a reinforcement of the security of the web browser and anonymization of the user's public IP. 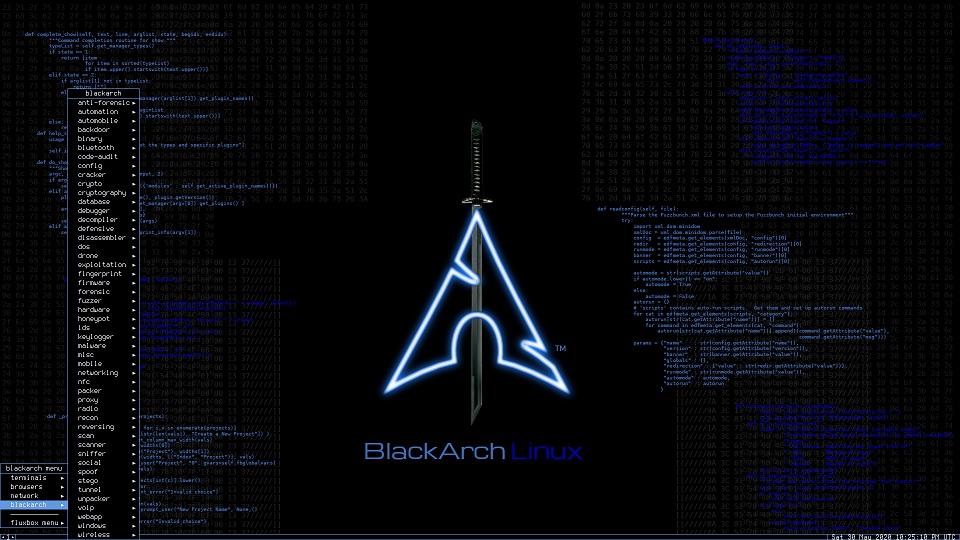 BlackArch is a penetration testing distribution based on Arch Linux that provides a large number of cyber security tools.
BlackArch Linux is an Arch Linux-based distribution designed for penetration testers and security researchers. It is supplied as a live DVD image that comes with several lightweight window managers, including Fluxbox, Openbox, Awesome, and spectrwm. It ships with over a thousand specialist tools for penetration testing and forensic analysis.
It is an open-source distro created especially for penetration testers and security researchers. The repository contains more than 2809 tools that can be installed individually or in groups. Compared to the Kali Linux and Black Arch Linux are both very useful. Kali Linux is very user-friendly; therefore it is the most widely used by beginners and students. The Black Arch Linux OS is more powerful and is used by professionals. Once you get a little experience of using Kali Linux, then you can use Black Arch Linux.
BlackArch also makes available an OVA image to run through virtualization solutions like VirtualBox, VMware, and QEMU and a build for ARM processors. 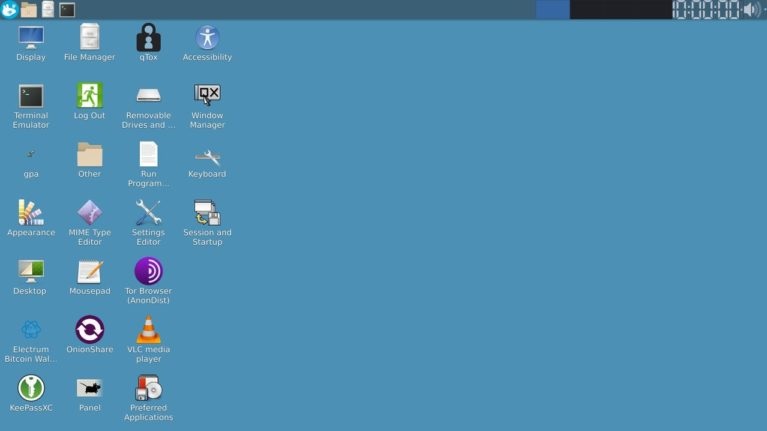 Whonix is a Kicksecure–based security-hardened Linux distribution. Its main goals are to provide strong privacy and anonymity on the Internet. The operating system consists of two virtual machines, a "Workstation" and a Tor "Gateway", running Debian GNU/Linux. All communications are forced through the Tor network. Whonix is ​​almost 100% safe as the «Workstation» machine passes all data packets through the Tor system to ensure anonymity. Also, when using a machine as a gateway, if someone tries to attack you, at most they can reach the "Gateway" machine, leaving the other completely safe.
The workstation uses a Whonix gateway to connect to the internet, and this gateway uses the Tor network. In addition, all traffic first gets encrypted before leaving the network. The workstation doesn't reveal its real IP, which it doesn't know
Whonix ™ is an operating system focused on anonymity and security. It hides the user's IP address/location and uses the Tor network to anonymize data traffic.
Hello! Welcome to techbard.in Techbard.in is an "Indian Top Tech News Website"- This Blog completely dedicated to the Latest Tech News, Tech Updates, How-To's from all Top Sources in an…