EA announced that FIFA 22's cross-play feature will be tested "in the near future" between players on PlayStation 5, Xbox Series X and S, and Stadia 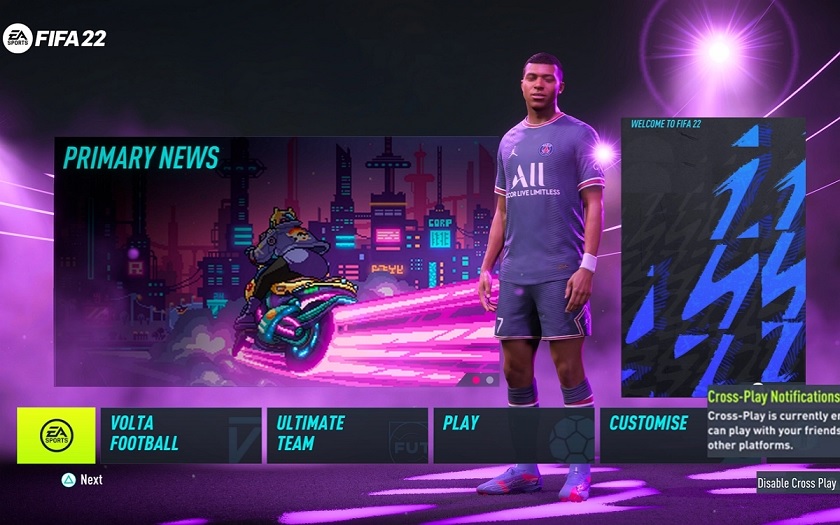 One of the most anticipated features for football simulator lovers is the possibility to expand their online gaming borders and be able to face other players from other platforms, something that in the gaming world is known as crossplay. Well, as you know, FIFA22 doesn't offer this feature and we only have the option to face off with someone who plays on the same platform as us, namely, PlayStation 4 vs. PlayStation or PC vs. PC, for instance, something that is however about to change favorably.

Yes, It's Official! EA has announced that  FIFA 22 is testing cross-play multiplayer soon, but it won't be coming to FUT. In a blog post on the official FIFA 22 website, it was announced that cross-play functionality will be tested in "the near future", with players able to try competing against opponents on other systems.

For now, the cross-play test will only be available across the PS5, Xbox Series X/S, and Stadia versions of the game, meaning Xbox One, PS4, and PC players will be left out.

It will also only be added to Online Seasons and Online Friendlies modes, meaning it won't be coming to FIFA Ultimate Team (FUT). This isn't the first time EA has snubbed PC gamers, who already don't have access to certain features like Hypermotion.

Indeed, according to a Q&A on the official page, it doesn't look like FIFA 22 's FUT mode will be getting cross-play at any point, and the earliest it will arrive will be for FIFA 23 (which may be the last game with the FIFA branding).

"While we want to enable our players to play with as many friends and others as possible, we limited the test to these two modes with the aim of reducing the chance of introducing new issues into the game," the page reads. "We are confident that the game data and feedback that we get from these two modes will help inform how Cross-play could further be implemented in future titles."

EA says cross-play in Online Seasons will work just like it normally does. "Assuming that you have the Cross-play test enabled, you can head into Online Seasons as you normally would, there's nothing else that needs to be done," it claims.

"As usual, the matchmaking will search for an appropriate opponent, and they may or may not end up being on a different platform than you."

However, there is no official news on when the Cross-paly will launch but as per reports, it is clear that it is in a final testing phase, or even there is no clarity when the cross-play feature will be a permanent part of the game. However, the publisher revealed more information via a short FAQ. The update adding the feature is expected to arrive soon for next-gen consoles.

While we want to enable our players to play with as many friends and others as possible, we limited the test to these two modes with the aim of reducing the chance of introducing new issues into the game. We are confident that the game data and feedback that we get from these two modes will help inform how Cross-play could further be implemented in future titles. ,” the developers wrote in the blog post.

It is therefore hoped that the next game from EA will be delivered directly with cross-play. For those who still haven't tried FIFA 22, we remind you that EA's title is one of the games offered in May on PlayStation Plus.