Indian Government warns citizens says, 'Do not share photocopy of your Aadhaar'

Indian Govt, warns citizens- 'Do not share photocopy of your Aadhar' instead use a masked Aadhaar that displays only the last 4 digits of Aadhar card 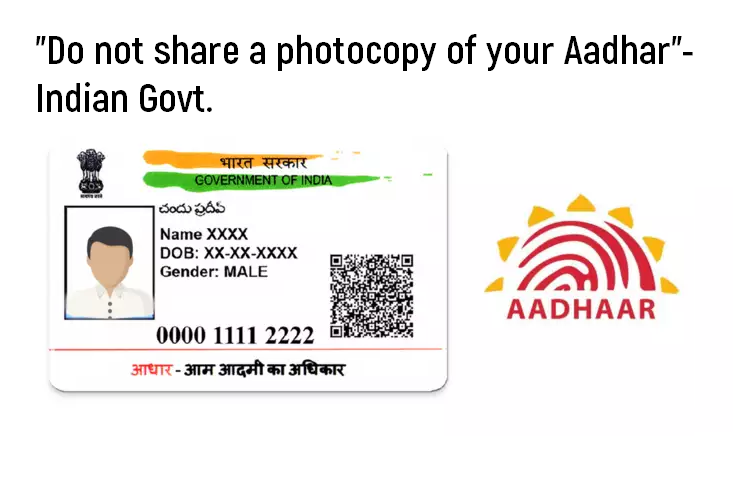 The Indian Government- Ministry of Electronics & Information Technology (MeitY) has issued a caution order and has withdrawn the advisory that had asked citizens to stop sharing the photocopy of their Aadhaar cards with anyone, including all organizations. The order primarily states that sharing or distributing a photocopy of your Aadhaar card could be misused by anyone. In a statement issued on Sunday, the Indian Government withdrew UIADI's (Unique Identification Authority of India) earlier press release, citing the "possibility of misinterpretation". MeitY clarified- "UIADI issued Aadhaar cardholders are only advised to exercise normal prudence in using and sharing their UIADI Aadhaar numbers".

Do not share a photocopy of your Aadhaar with any organizations because it can be misused. Alternatively, please use a masked Aadhaar that displays only the last 4 digits of your Aadhaar number. It can be downloaded from UIDAI's official website https://myaadhaar.uidai.gov.in. Please select the option "Do you want a masked Aadhaar" and proceed to download.

The existence of any Aadhaar number can be verified at https://myaadhaar.uidai.gov.in/verifyAadhaar. To verify offline, you can scan the QR code on the e-Aadhaar or Aadhaar letter or Aadhaar PVC card using a QR code scanner in the mAadhaar mobile application. Please avoid using a public computer at an internet café/kiosk to download an e-Aadhaar. However, if you do so, please ensure that you delete all the downloaded copies of e-Aadhaar permanently from that computer.

Only those organizations that have obtained a User License from the UIDAI can use Aadhaar for establishing the identity of a person. Unlicensed private entities like hotels or film halls are not permitted to collect or keep copies of Aadhaar cards. It is an offense under the Aadhaar Act 2016. If a private entity demands to see your Aadhaar card or seeks a photocopy of your Aadhaar card, please verify that they have a valid User License from the UIDAI.