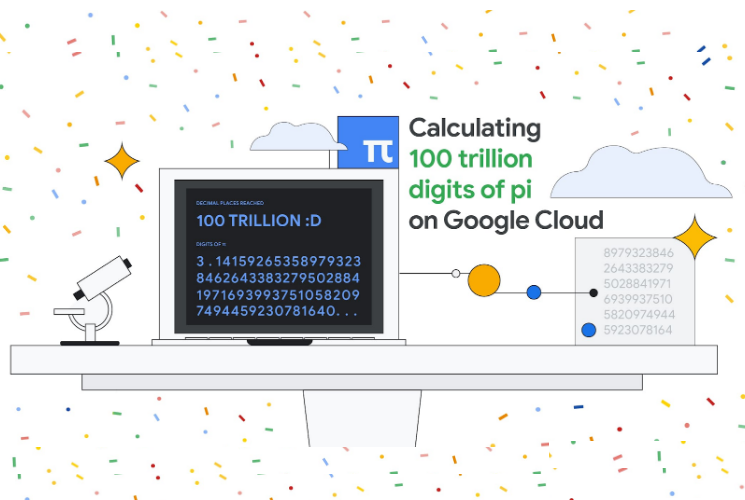 Back in 2019, Google Cloud calculated 31.4 trillion digits of the number Pi, the highest mark reached by it until then. With the latest result, it was possible to triple the capacity of calculated decimal places in just three years, thanks to the Compute Engine technology, which uses machines with an output bandwidth of 100 Gbps.

Further, Google Cloud announced in a statement that;

This achievement is a testament to how much faster Google Cloud infrastructure gets, year in, year out. The underlying technology that made this possible is Compute Engine, Google Cloud’s secure and customizable compute service, and its several recent additions and improvements: the Compute Engine N2 machine family, 100 Gbps egress bandwidth, Google Virtual NIC, and balanced Persistent Disks. It's a long list, but we'll explain each feature one by one.

How are 100 Trillion digits of π Calculated using Google Cloud?

According to Google Cloud, here’s an overview of their requirements ran to calculate our 100 trillion digits of π.

An n2-highmen machine with Intel Xeon 128 vCPUs and 864 GB of RAM was used to calculate the 100 trillion digits of the Pi on Google Cloud.
The device has 663 TB of storage, of which 515 TB was used during the process.
Google Cloud also reported that the activity started on October 14, 2021, and was only finished on March 21 of this year, taking a total of 157 days, 23 hours, 31 minutes, and 7,651 seconds. In the end, 82 petabytes of data read and written by the device were generated.
Calculating 100 Trillion Digits Of Pi- Pi is classified as an irrational number, that is, it cannot be expressed as a ratio of two integers, so its decimal representation never ends. Mathematicians have been trying to improve accuracy for thousands of years, he says he earned more than 37 trillion digits in Google's cloud computing work.

After Calculating, the result of the One-Hundred Trillionth Digit of π is "0".
Google Cloud team announced that when the calculation was completed they also verified the final numbers with another algorithm (Bailey–Borwein–Plouffe formula) and the Bailey-Borwein-Plouffe formula found that our results were valid.
Here is the result of the last 100 Trillion digits of π:
Source: Google Cloud
Hello! Welcome to techbard.in Techbard.in is an "Indian Top Tech News Website"- This Blog completely dedicated to the Latest Tech News, Tech Updates, How-To's from all Top Sources in an…