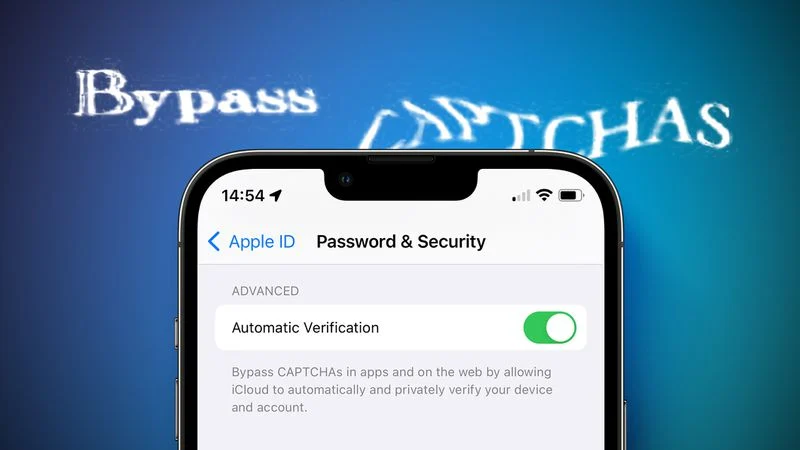 Apple announced iOS 16 earlier this June which introduces several new features to its iOS 16. According to a recent report from MacRumours, Apple introducing a new feature called "Automatic Verification" that will let you to Bypass CAPTCHA Verification Prompt in apps and on the websites. Currently, the new iOS 16 is in beta stage but users can find the update by navigating to: Settings > Apple ID > Password & Security > Automatic Verification. Once enabled, iCloud will automatically and privately verify the user devices and Apple ID account in the background that will stop apps & websites to prompt the annoying CAPTCHA Verification.

In a video released, Apple detailed that its system verifies that the device and Apple ID account are in good standing and presents what is called a Private Access Token to the app or website.

The new system promises to offer a better user experience for tasks like logging in or creating an account, with more privacy and also accessibility compared to the traditional CAPTCHA mechanism.

In early beta versions of iOS 16 and iPadOS 16, this feature is enabled by default. The new tool can be found in the Settings app, under Apple ID > Password & Security > Auto Verification.

The report adds that Cloudflare and Fastly– two major content delivery network (CDN) providers) have announced support for this, which should mean that many of the websites and apps will get this capability.

The developer beta for all of Apple’s upcoming software is available for download and installation. It is recommended that regular users should not install the developer beta on their primary iPhones, iPads and Macs, given it usually has a lot of bugs and other issues. The public beta will be made available next month.

Apple further noted that this feature is also supported on macOS Ventura. All new versions of Apple's operating systems are currently in beta testing and will be released later this year.