'I Am Groot' animated series Coming to Disney + on August 10, 2022. Hollywood actor Vin Diesel renders his voice to the character of the Baby Groot 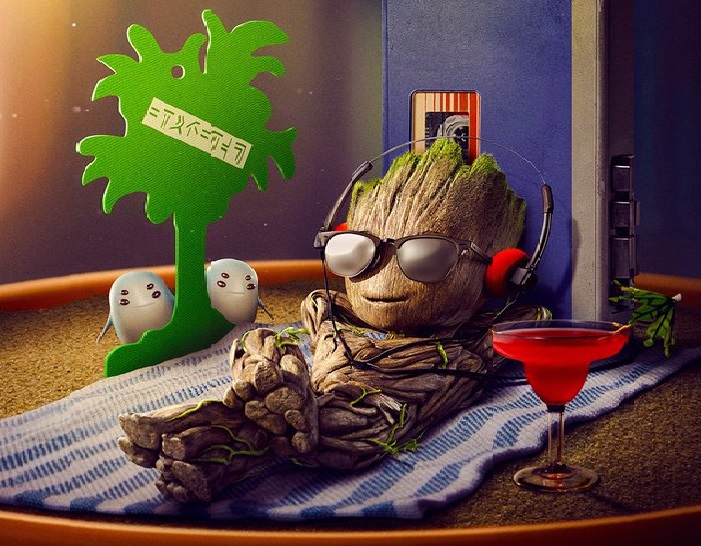 Marvel Studios officially announces that 'I Am Groot', an animated series on baby Groot's life, will exclusively premiere on Disney+ on August 10, 2022. In this animated series, Hollywood actor Vin Diesel renders his voice to the favorite character of The Guardians of the Galaxy, "Baby Groot". Marvel Studios announced the date of this original series of shorts on June 5 with the unveiling of the official animated series poster that shows a baby Groot chilling with his sunglasses,  a cocktail, a beach towel, and headphones connected to Peter Quill’s popular Walkman played by Chris Pratt. You can also see two four-eyed penguins hiding at the back of a tree, hinting at the mischievous element in the series. The poster also indicates that the series will be in 3D. For the rest, Disney and Marvel were content to specify that the series "will follow the glory days of Baby Groot's growth, and the troubles that will follow among the stars".

According to Marvel Entertainment;

'I Am Groot' - "Baby Groot"  — The series of original shorts —following Baby Groot’s glory days growing up, and getting into trouble among the stars — premieres on August 10 exclusively on Disney+. Take a look at the brand new poster for the series above, featuring a very relaxed little Baby Groot just chilling out with his favorite tunes.

The third opus of the Guardians of the Galaxy will be released in theaters in the spring of 2023. This spin-off series will be the second series of the MCU in the short format.